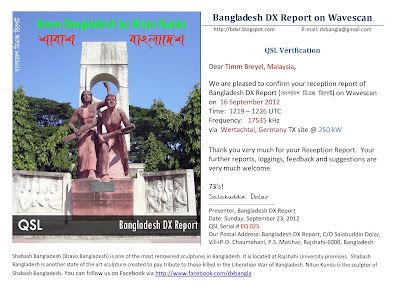 Adventist World Radio - Wavescan, transmitting from Wertachtal, Germany, was logged on 16 September 2012 from 12.00 to 12.30 UTC. An English language broadcast featured the announcement of the AWR-Wavescan DX Contest winners and discussion on Radio Netherlands continued operation in Africa, followed by the Bangladesh DX Report and music from Brazil. This broadcast was heard on the frequency of 17.535 kHz. Reception (SINPO) was 25332 -- weak signal strength but clear and audible speech amidst atmospheric noise and fading

A reception report was emailed to both Bangladesh DX and Wavescan addresses immediately after the transmission. This eQSL (No. 25) from Salahuddin Dolar at Bangladesh DX arrived on 24 September 2012.