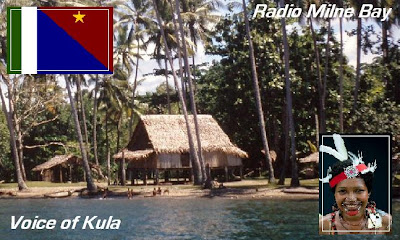 National Broadcasting Corporation - Radio Milne Bay, transmitting from Alotau (Milne Bay), Papua New Guinea, was logged on 12 September 2012. News and music in English was observed from 20.05 to 20.30 UTC on 3.365 kHz. Reception (SINPO) was 25432 -- weak signal strength, fading and some atmosphere noise. Despite these conditions, audio was clearly heard. Reception of signal gradually faded out and disappeared after 20.30 UTC.

A reception report was initially emailed on the same day and subsequently posted. A number of follow-up emails were sent to info@nbc.com.pg. After realising a response was probably futile using this method of communication, I discovered a few links on Facebook that lead me to a contact  at Radio Milne Bay. A few emails and Facebook messages resulted, then word of the death of the Provincial Radio Manager at Milne Bay. Meanwhile I created a self-prepared eQSL, then a week later submitted it to Radio Milne Bay hoping my contact at the station would forward it to the Acting Provincial Radio Manager. Finally, on 4 December 2012, I received a response from the Acting Provincial Radio Manager who returned my eQSL (minus original colour and clarity) with his signature and NBC stamp. 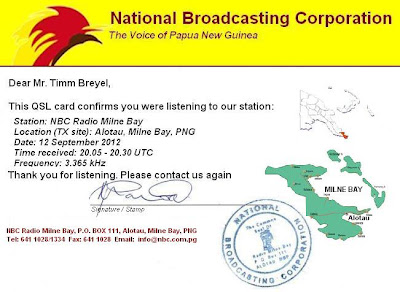