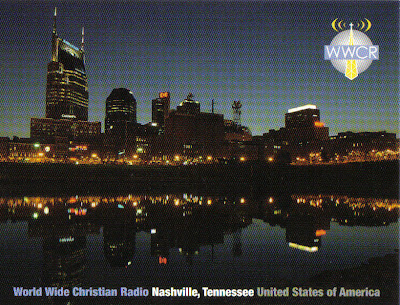 WWCR in Nashville, Tennessee, USA was heard on 20 April 2011. Evangelical Christian programming in English was monitored from 17.00 to 17.30 UTC and 18.45 to 19.00 UTC on 15.825 kHz. During this time their signal (SINPO) was extremely weak and affected by heavy QRN. Daily broadcast times are from 11.00 to 21.00 UTC.
The station was received with my Sangean ATS-909 and Degen DE-1102 linked to an external 1/4 wave aerial. My Grundig Satellit 500 and Grundig Satellit 750 detected the signal, but the Sangean and Degen had better clarity.
Reception reports were posted on two occasions. The second time I sent along one International Reply Coupon. This particular QSL card is for the subsequent report submitted on 18 July 2011. The card arrived in the mail on 19 August 2011. 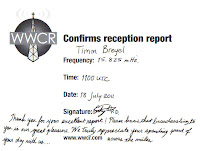