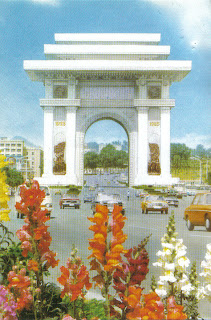 The Voice of Korea in Pyongyang, Democratic People's Republic of Korea (North Korea) was monitored on 8 April 2011 between 11.00 and 12.00 UTC on 11.735 kHz. Broadcast was in the French language and featured a largely talk/commentary format, interspersed with 'Revolutionary' inspired music.

Signal (SINPO) was very strong and clear using my venerable old Grundig Satellit 500. It was linked to a 10 meter elevated 1/4 wave aerial with a 50 ohm coaxial cable fed through an MFJ-956 antenna tuner.

Although the Voice of North of Korea has been QSLed and is heard regularly in Malaysia, I have opted for a recent QSL card from them. Reception report was sent by mail. QSL card was received on 20 July 2011, along with a pennant, lapel pin, newspaper and cultural magazine.