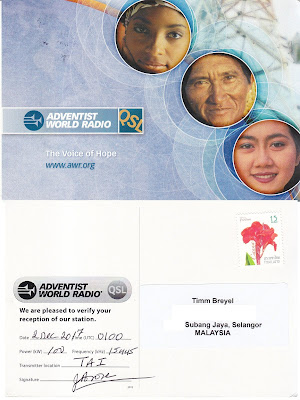 Adventist World Radio via Taipei (Taiwan) was heard on 15.445 kHz, with SINPO of 55555. This hour-long Vietnamese broadcast featured a mix of health news, religious topics and Vietnamese music from 00.59 till 02.00 UTC. The transmission from Taipei (presumably from an RTI transmitter, judging by the audio feed recorded just before the broadcast began) airs only on Saturdays.  HERE's AWR via Taipei.

Reception report was emailed to several AWR accounts, butthe first and most reliable nowadays (at least for me) is out of Thailand. Note the unmarked Thai postal stamp on ethe QSL card, which arrived on 30 December 2017.