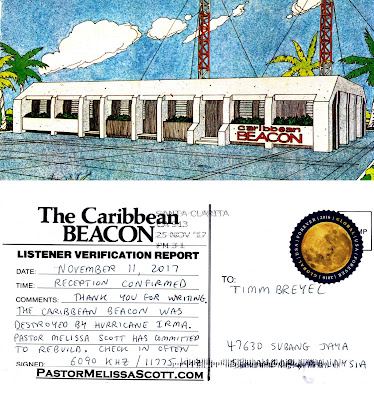 If indeed "Reception Confirmed" is referring to the 15 March 2013 report, then thank you very much. I'm delighted to get this verification for a Caribbean Beacon broadcast that was logged at 20.00 to 21.00 UTC, on  11.775 kHz with SINPO of 22332, which was weak in signal strength but audible, despite strong interference from Radio Algerienne Holy Quran in Issoudun, France. As I noted then, when the grey-line between Asia and the Caribbean approached their signal improved, and when Radio Algerienne signed off at 21.00 UTC reception was 24332.

This marks my second confirmation from the station, the first being for a reception report submitted in April 2012. As I recall, that reception report also took several years before a QSL card was received.
Posted by T.L. Breyel at 12:56 AM