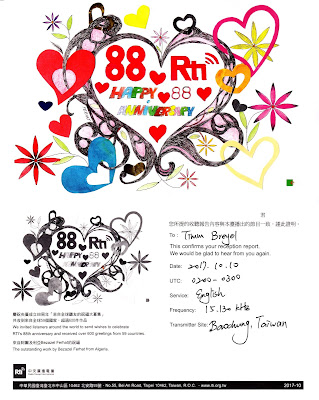 Radio Taiwan International, transmitting from Baochung (Taiwan), aired a 'live' broadcast of the 106th National Day festivities on 10 October 2017, from 02.00 till 03.00. RTI announcers Natalie Soh and John Van Trieste hosted this hour-long broadcast of speeches from  the President of Taiwan, foreign dignitaries and guests, as well as music by "Formosa Crew" UTC. Insomuch as this transmission targeted Southeast Asia, reception on 15.130 kHz rated a  SINPO of 55555 -- excellent on all accounts for the duration of the broadcast. HERE's an audio excerpt from this broadcast.

Reception report was emailed and submitted online on the same day. QSL card arrived in the mail on 25 October 2017.

Listeners who tuned in to this broadcast received an RTI souvenir -- a black-and-white tote bag, featuring RTI insignia and microphones over the ages.
! 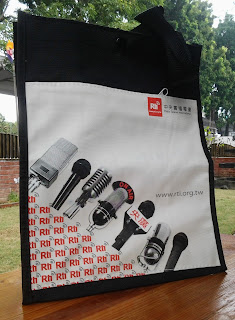