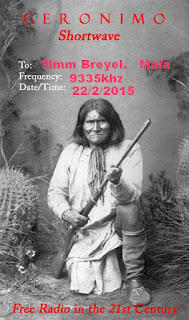 On January 2nd, we were completely taken by surprise on hearing the sad news that a long time friend and colleague at Geronimo Shortwave, Chris Watson, had passed away at home in France, on Wednesday 28th December. We are sad, shocked and deeply moved.

Chris was involved in shortwave free radio for over 30 years operating a number of stations under different names: Anchor Radio, Radio Caroline East, Radio 48 (as Howard Bell) in the 80's, and then Geronimo Shortwave from the 90's through to recently. He had a passion for shortwave and even though it became more difficult for him to broadcast via his own transmitter in more recent times due to his domestic circumstances, he kept Geronimo Shortwave going through various relay stations. He was rarely on the air himself. While others presented the shows, Chris was dedicated to the technical side of the SW hobby. In the 1980s several Radio 48 broadcasts came from the same site being used by then well known FR station Radio Apollo, in those days operated by FRS’ Dave Scott. Both stations were often running from the same woodland either in Staffordshire, Worcestershire, Herefordshire or Wales. Dave continued recording shows for Geronimo until a couple of years ago when his work on his prog rock show took over more of his radio time. Also Peter Verbruggen has presented Geronimo shows in the past. Over all these years contacts with Chris remained regular. Late November Chris revealed his (Geronimo) plans for 2017….these will never come true.

Chris was a true stalwart of shortwave free radio, with a genuine passion and enthusiasm which never dimmed. Shortwave will certainly be worse off for his absence.

Our sincere condolences go out to his wife Pat & his family.

Rest in Peace Chris. And may that big transmitter in the sky get a SINPO of all the 5's!