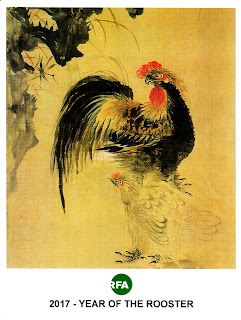 Radio Free Asia via presumably Ulanbaator-Kronkor (Mongolia) was observed on 17.750 kHz from 01.25 till 02.10 UTC. A Tibetan broadcast of current event reports and contemporary Tibetan music, along with RFA station ID at the top of the hour was noted. Reception  initially was quite good with no interference from China, rating a SINPO of 54555. Although, I hasten to add by 01.45 UTC, RFA signal was faintly audible under a dominant Chinese broadcaster. at this point, RFA only occasionally broke through the co-frequency interference to rate a SINPO of 22532. A 02.00 UTC, reception was still a muddled mess, but RFA managed to pull through at times to rate a SINPO of 33543.

Reception report was emailed on the following day. Apparently delivery to Malaysia was delayed when the card was mistakenly routed to Sri Lanka. Needless to say it eventually reached its destination, albeit much later than expected on 23 January 2017. 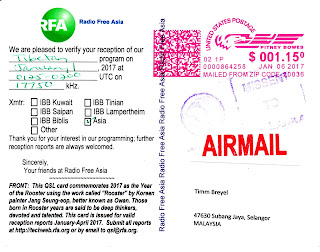