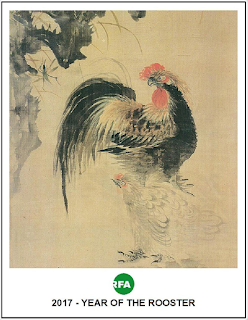 Radio Free Asia will commemorate 2017 as the Year of the Rooster with a QSL card highlighting the work called "Rooster" by Korean painter Jang Seung-eop, better known as Owan. This is RFA’s 63rd QSL and will be used to confirm all valid reception reports, January – April 2016.

People born in Rooster year are said to be deep thinkers, capable, and talented. According to tradition, they like to be busy, devoted beyond their capabilities and are deeply disappointed if they fail. They are also considered a bit eccentric and having difficult relationships with others. Roosters are considered to be loners and, though they give the outward impression of being adventurous, they are timid.

RFA encourages listeners to submit reception reports.  RFA confirms all accurate reception reports by mailing a QSL card to the listener.  RFA welcomes all reception report submissions at http://techweb.rfa.org (follow the QSL REPORTS link) not only from DXers, but also from its general listening audience