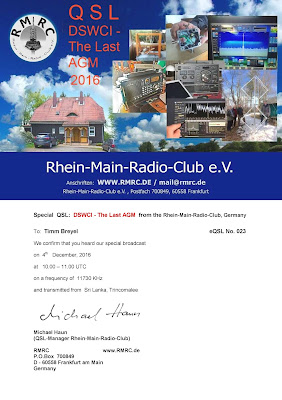 For my part, I monitored the "DSWCI - The Last AGM" broadcast from Trincomalee (Sri Lanka) on 4 December 2016. An English language broadcast, consisting of interviews of DSWCI members and guests at this last AGM, mixed with nostalgia and a Danish folk song that was part of the club's history, was observed from 10.00 till 11.00 UTC. Reception on 11.730 UTC was (SINPO) 54545 -- strong signal, clear audio and minor fading. Despite these conditions, reception was good. Despite these conditions, reception was good.This was certainly an improvement over the Trincomalee transmission of 3 December, and hasten to add for obvious reasons; it was beamed specifically to India, Middle East and Europe, not eastern Asia, Pacific and Americas.

HERE's an excerpt from this broadcast.

Reception report was emailed and posted to RMRC on the same day. This eQSL arrived on 7 December 2016. Paper QSL from Robert Kipp arrived on 15 February 2017. 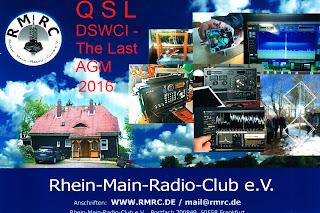 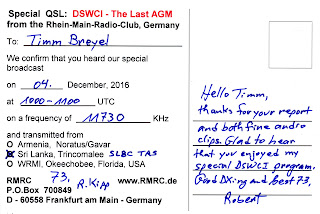