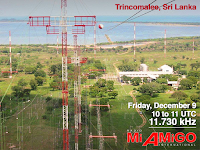 A special Radio Mi Amigo broadcast, targeting Asia, Australia, China and Japan, will air on Friday, 9 December 2016, from 10 till 11 UTC, on 11.730 kHz. For this purpose, the 125-kilowatt Trincomalee (Sri Lanka) transmitter site will be utilised. 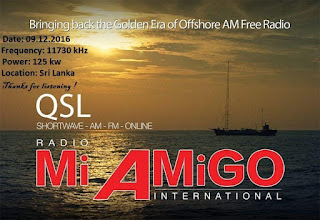 Radio Mi Amigo, broadcasting from Trincomalee, indeed aired on 9 December 2016. This special hour-long broadcast to the Asia-Pacific region, hosted by Capitan Kord, included a selection of classic rock music, including Men at Work - "I Come from the Land Down Under", BeeGees - "Jive Talking", a cover version of Stealers Wheel "Stuck in The Middle With You" and more. A bit of Radio Mi Amigo and off-shore radio history was interspersed between the music and Radio Mi Amigo DJ promos.

Reception on 11.730 kHz rated a SINPO of 55555 -- exceptional on all accounts. HERE's how the Radio Mi Amigo transmission sounded in South East Asia (Malaysia).