Vatican Radio+, transmitting presumably from Santa Maria di Galeria, in a "Special Broadcast of World Youth Day 2016" from Krakow, Poland was monitored from 16.50 till 18.40  UTC, on 30 July 2016. This segment of the broadcast featured speeches and contemporary music with moderation from a  French speaking, female announcer, which lasted well beyond 17.50 UTC. A speech by the Pope and religious music in Latin was noted after 18.00 UTC. 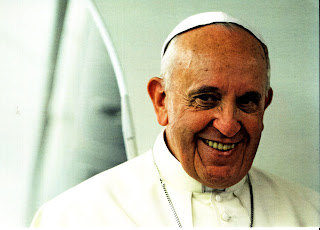 From the Netherlands, reception on 15.540 kHz initially was (SINPO) 55555 -- excellent signal strength, clear audio, no interference. By 17.30 UTC, reception was 55444 -- still strong and clear, but with slight fading and atmospheric noise. HERE is an excerpt from the broadcast as heard using the Twente SDR receiver.

This transmission was also received directly in Malaysia at 16.50 UTC. However, only a faint carrier with audio in LSB mode was noted, yet much too weak to discern speech clearly. Reception began to improve around 18.00 UTC with SINPO of 25322 -- audible and discernible speech when not fading under noise. HERE is an excerpt from this broadcast as received in Malaysia using a Tecsun S-2000. 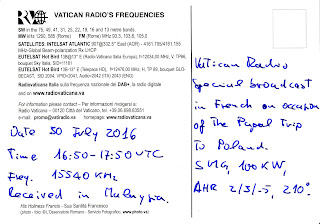 Two reception reports were emailed to Vatican Radio on the same day: one for remote reception and the other for direct reception. On 1 August 2016, Sergio Salvatori for Vatican Radio, replied saying: "Thank you for the reports, I have sent you the requested QSL". QSL card arrived in the mail on 22 August 2016.

+Transmission was monitored both remotely from an SDR receiver in Enschede, The Netherlands (Twente University) and directly in Malaysia using a Tecsun S-2000 linked to a 1/4 aerial
Posted by T.L. Breyel at 1:26 PM