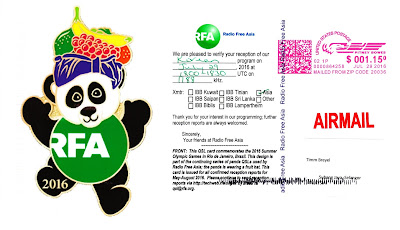 Radio Free Asia, transmitting presumably  from  Seoul (Incheon), Republic of Korea was logged on  29 July 2016. A Korean language broadcast of news/current event reports with occasional music filler was observed from 18.00 till 18.30 UTC. Reception on the medium-wave frequency of 1188 kHz was (SINPO) 23322 -- weak signal, co-frequency interference from a Thai station, RFA audible only when not fading under Thai station (every three to four minutes). That's not bad for a signal over 4,610 km away! 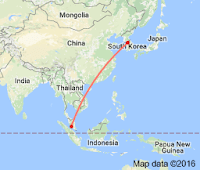 Reception report was emailed to RFA the following day. QSL card arrived in the mail on 11 August 2016.