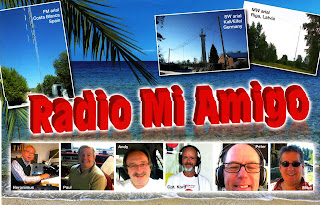 Radio Mi Amigo International, in a test transmission from Yerevan-Gavar (Armenia), was received on 17 July 2016, from 16.58 till 17.50 UTC (broadcast time 17.00 till 18.00 UTC), here in the Kuala Lumpur area. While excellent reception on 11.850 kHz was hampered by a weak signal, severe co-frequency interference from a utility station and fading every two to three seconds, this German/English broadcast of mostly English language rock songs was heard, among these being Manfred Mann's "I Came for You". Although speech was unclear at times, DJ Capt Kord (presumed) and the driving beat of rock music were very noticeable up until about 17.50 UTC. All in all, despite being unable to clearly hear the  broadcast, which was obviously targeted to Europe, it was nevertheless a nice show! 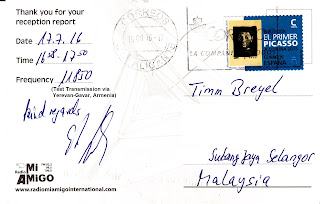 Reception report was submitted online to both Shortwave Service GmbH and Radio Mi Amigo International. It was emailed as well to both parties on the following day. An eQSL was received shortly afterwards. Paper QSL arrived in the mail on 5 September 2016, postmarked Spain. 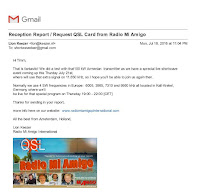