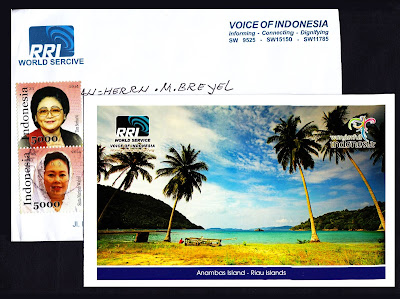 Voice of Indonesia (Stimme Indonesiens), the German language broadcast of VOI (Jakarta), was received on 30 March 2016. Programmes from 18.00 till 19.00 UTC included frequent station IDs  between "Nachrichten", "Kommentar" on Papua, "Dieser Tag in der Geschichte", "Grüne Technologie" in Indonesia, "Wunderschoenes Indonesien" segment on Bali, "Sprechen wir Indonesisch" and "Indonesische Musik" featured songs performed by Hetty Koes Endang. Interestingly, an all female staff of announcers, speaking in Indonesian accented German, presented the programmes. What a delight! Not only was the programming informative and entertaining, it demonstrated VOI's commitment and genuine  interest in their German listeners. Kudos to VOI!!!

Reception on 9.525 kHz was (SINPO) 55555 -- excellent reception for much of the broadcast! However, at 18.58 UTC, QRM from China Radio International degraded reception to 53553. HERE is an audio recording made around 18.25 UTC (Wonders of Indonesia) to give an idea of the quality of reception. 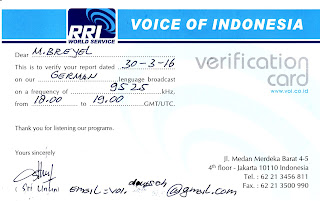 Reception report was submitted in German and English, both online and email, 31 March 2016. A computer generated emailed responded promptly to my online reception report. QSL card arrived on 15 July 2016.