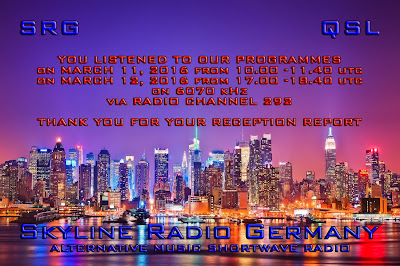 Skyline Radio Germany*, broadcasting from Channel 292 in  Rohrbach (Germany), was monitored  on 12 March 2016, from 17.10 till 18.05 UTC. A selection of heavy metal rock from much of the Seventies and Eighties was heard. DJ chatted in German  between songs mentioning he was "old school" and his selection of tracks were played on a  "plattenspieler" (turntable).

*Transmission was received using SDR web-receiver in The Netherlands (Twente)
Posted by T.L. Breyel at 8:01 PM