Radio Six International, a private (not for profit) radio station operating from Scotland, will be on shortwave this on Saturday, 19th March from 12:00 to 17:00 UTC. As well as the usual programmes, there will be a special two-hour live edition of Saturday Sounds hosted by Tony Currie and including live emails and messages. Listen online as usual or tune in to 6.070 kHz (49.39m) from a transmitter (Channel 292) near Munich in Germany.

Radio Six International encourages listeners -- especially those listening by shortwave -- to send  their reception reports.  A QSL card will be issued with the inclusion of  either one Euro, two US Dollars or an International Reply Coupon to cover return postage, together with the report and listener's name and return address to: 21 Sherbrooke Avenue, Glasgow G41 4HF, Scotland. Email: letters@radiosix.com. Website: www.radiosix.com/ 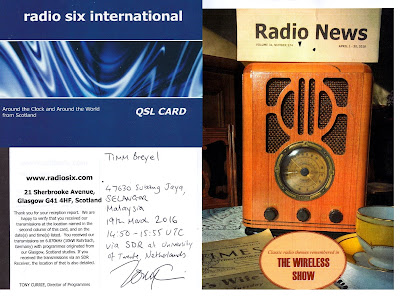 Reception on 6.070 kHz was (SINPO) 55545 -- excellent signal strength, audio quality, with slight and occasional fading, no QRN and no QRM.

HERE's an idea of how Radio Six International sounded.

Reception report was emailed shortly after the broadcast, then a letter was posted later in the week.This eQSL along with a programme schedule arrived on 22 March 2016. Paper QSL and newsletter arrived in the mail on 11 April 2016. Thank you, Tony!!!

*Transmission was received using SDR web-receiver in The Netherlands (Twente)