Radio Mediterranee Internationale, transmitting from Nador, Morocco, was logged on 20 August 2012. A French and Arabic language broadcast of music, news and talk was observed from 19.55 to 20.30 UTC on 9.575 kHz. Reception (SINPO) was 24442 -- weak signal strength, but clear and audible speech nevertheless.

Reception report was emailed shortly after listening to Radio Mediterranee International. Previous reports to them were posted and emailed, always to no avail. I will make another attempt, although I am doubtful a response will be forthcoming. African stations are poor to respond. 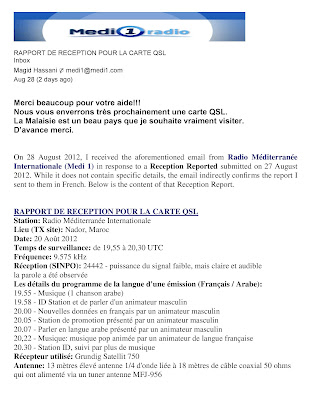