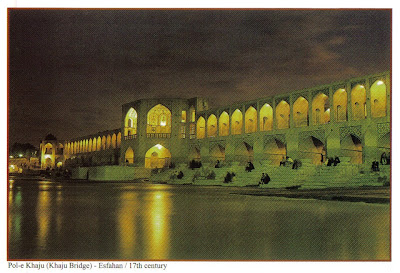 Islamic Republic of Iran Broadcasting (IRIB), transmitting on medium-wave presumably from Dehgolan [Deh Golan], Kordestan Province,  was possibly logged on 20 July 2012. Time monitored was from 17.15 to 19.00 UTC. During much of this period, Iman Abdul Rahmah Sudais was heard reciting the Quran. Oddly, John Denver's song, "Country Roads" followed, then Islamic programmes  highlighted the month of Ramadan. This progamme format was observed on the frequency of  945 kHz. Reception at 17.15 UTC was 33433 -- fading every 10 minutes with interference from a Thai station. At 18.00 UTC onward reception improved to 35433 -- fading persisted, but Thai station had signed off at 18.00 UTC.

A reception report was emailed to IRIB a few days later. This QSL card arrived on 29 August 2012, along with confirmation of IRIB via Zahedan on 12.080 kHz and Dehgolan on 945 kHz. To be honest, I must disqualify this QSL from Dehgolan. 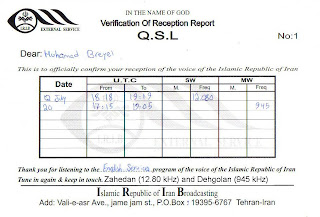 I believe the Islamic programming I actually heard originated from Thailand.  The language was not standard Thai, but possibly Pattaya Thai or Cham Malay/Khmer. Confirmation is needed from a linguist in South East Asian languages. The station quite likely heard during the month of Ramadan was Thor. Phor. Song -- Kong Thap Phaak Thii Song (2nd Army Area), Aphai Road, Tambon Nai Muang, Muang District, KALASIN 46000 Thailand. One week after Ramadan, this station is unheard. I should follow up with a reception report, but I've had poor response from Thai stations.