Radio Damascus in Syria was logged on  8 August 2012. An English language broadcast of Arabic music, Syrian perspective on the country's current unrest and cultural topics was monitored from 21.15 to 22.00 UTC. This Broadcast was observed on 9.330 kHz. Reception (SINPO) was 44544 -- good signal strength, slight transmitter hum, otherwise audible speech and music. At 21.30 UTC some transmission problem was noted; transmitter was switched off and on. At 21.33 UTC transmitter was stabilized.

Reception report was emailed on the same day. Later in the evening I received this confirmationRasheed Haidar, English Program, Radio Damascus: "Thank you so much for your letter and reception report. I will have my colleagues send you the QSL Card, and please keep following up the English Program, I will have my colleague of " the Overseas Listeners Program" answer your letter next episode." 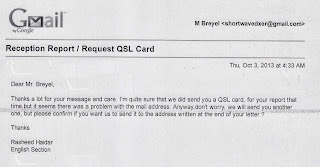 QSL card did not arrive, so a follow-up email was submitted in October 2013. QSL card was promised.