CVC International - La Voz, transmitting from Calera de Tango (Santiago), Chile, was logged on 16 August 2012. Their Spanish language broadcast was monitored from 22.30 to  23.00 UTC. Reception was  (just barely audible in LSB mode) on 17.680 kHz. Reception (SINPO) was 25221 -- carrier signal was  detected amidst severe atmospheric noise; only faint, incomprehensible audio could be heard when signal faded in and above the noise.

This transmitter site will be closed on 17 August 2012, then will be dismantled. I can still recall the Voice of Chile -- many years ago -- operating from this site and signing on with its signature Latin American interval tune using a Spanish guitar. 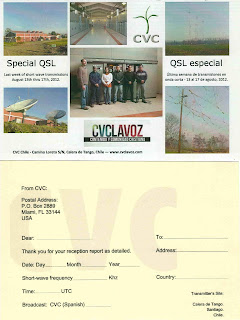 Reception report was emailed and submitted on-line. After a few periodic reminders by email, the General Manager of CVC La Voz, Mr. Antonio Reyes replied  on 15 January 2013 with the following email (translated in English from Spanish text):

First of all, I would like to thank you for your reports during the last week of shortwave transmission from CVC La Voz. We closed the transmitter site a few months ago, and we have been dismantling it during these months. We will probably be finished this month.

I'm sorry for the delay in replying, but we have been in a complicated process from the technical, administrative and personal point of view. We have also reduced our personnel as well. We have been late in sending out the QSLs requested. But, during this month we will be sending out many QSLs, and due to the quantity of requests and reports we received, it will be difficult to send responses to everybody.

All of the messages and reports showed us that their were a lot of people listening to our signal, and this was greatly satisfying. By now, and in the case you do not receive the physical QSL, I'm attaching a scanned version of it. Also, I'm attaching a list of QSLs  already mailed.

With this email, he attached the above blank QSL and an Excel file listing of the names and addresses of people the QSLs were mailed to. My name appeared on this list. What a sad chapter in the history of this transmitter site and for CVC La Voz.

The promised QSL did indeed reach my mailing address. It arrived on 4 February 2013. Mucho gracias!