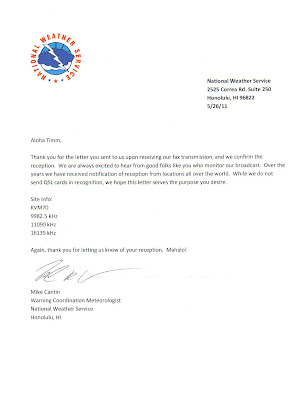 The funny thing is frequencies, other than the one I reported, are stated on the letter. The ID was definitely KVM 70. All the same, I count it as a QSL-letter from another short-wave station in Hawaii, other than WWVH.

Addendum to KVM 70:
To confirm the actual transmission of this station on the frequencies stated in this QSL-letter, I ran a check on two of the three frequencies. I observed a fax transmission on 18 December 2011, eminating from 16.135 kHz in USB/SSB at 03.55 UTC. Reception (SINPO) was 25222 - weak signal strength and hampered by QRN, but audible nonetheless. The same transmission was detected on 11.090 kHz in USB/SSB at a later time on the same day, but with slightly better reception.
Reception report was emailed on 2 December 2011. A letter arrived in the mail on 17 December 2011.