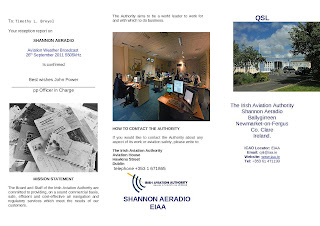 Shannon VOLMET in Ireland, operating with a 5 kW transmitter, was heard on 26 September 2011. Time monitored was from 17.45 to 18.15 UTC (24 hour broadcast) on 5.505 kHz in SSB/USB mode. Signal (SINPO) was 15321 -- despite the weak reception and atmospheric disturbance, speech was audible and clear at times. Signal was heard on a Grundig Satellit 750 and Sangean ATS-909W; the performance of  the later receiver performed proved to be the best on this particular occasion.
A synthesized female voice repeatedly announced  "This is Shannon Volmet" followed by the visibility, wind speed, cloud cover, temperature and dew point for Amsterdam, Dublin, Frankfurt, London and other European cities, which on this particular day included reports of showers in most cities and temperatures of 16-17 degrees Celsius.

Reception report was submitted on-line by email. I received this email reply within the day from Lilian Cassin, stating: "Thank you for your email. I have forwarded it to my colleagues in North Atlantic Communications on your behalf. We do indeed enjoy and appreciate hearing when our broadcasts have been picked up from around the world so I’m sure you will hear from my colleagues in the near future." True to their word, I received an e-QSL from EIAA a few hours later on 27 September 2011. 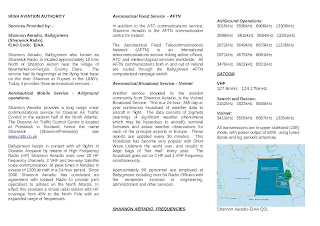