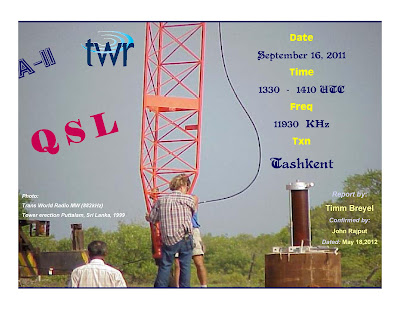 Trans World Radio India, transmitting presumably from a relay station in Tashkent, Uzbekistan, was heard on 16 September 2011 from 13:30 to 14.10 UTC in the Hindi language on 11.930 kHz. Signal (SINPO) was 44554 -- slight interference from an adjacent station, otherwise signal was strong and speech clear.
Reception report was submitted on-line at TWR India’s website, which while they appear to have received it, subsequent months proved to be unresponsive to my request. Subsequently several follow-up emails were sent and eventually one to TWR headquarters. This prompted an immediate acknowledgement from TWR's Bob Hall on 27 February 2012. He confirmed my report, saying:
"Thanks for your message. We have sent a follow-up message to our folks in the region.  Hopefully, they will be able to get a QSL card to you soon. Thank you for your patience."  After several follow-up emails I received an eQSL on 18 May 2012. Apparently a QSL was posted but never reached my residence.