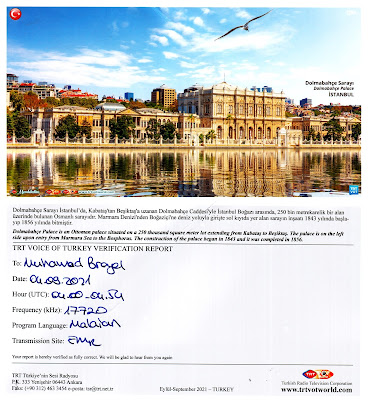 Voice of Turkey, transmitting from Emirler (Turkey), was observed on 4 September 2021, from 15.30 till 15.52 UTC. Station IDs between traditional music and cultural programmes in the Malay language was noted during this time period. heard Reception on the short-wave frequency of 17.720 kHz was initially good, but gradually weakened due to atmospheric noise, rating an overall SINPO of 55444. At 04.20 UTC transmission began to gradually weaken due to increased atmospheric noise, but signal remained audible till sign-off at 04.54 UTC.
Reception report was submitted on the same day. QSL card arrived in the mail on 7 October 2021.