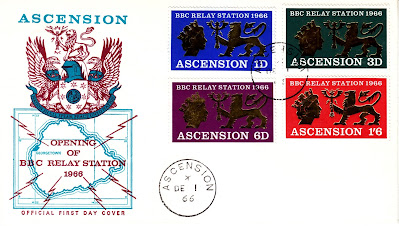 ASCENSION ISLAND on 1 December 1966 issued four first day cover stamps marking the opening of BBC Relay Station on Ascension. The images of Queen Elizabeth II and Lion With BBC emblem are gold embossed against four different colours (blue, green, red and purple) and corresponding to the individual monetary denominations - 1D, 3D, 6D and 1,6. The cachet depicts an illustration of Ascension Island with radio waves radiating from the island. Above the island is the heraldic crest of BBC Ascension Island.
In the mid-1960s, the BBC built the relay station at English Bay on the northern tip of the island to transmit shortwave radio broadcasts to Africa and South America, plus a power station to provide the electricity.

Four of the towers supporting HF curtain arrays on easterly bearings to Africa. The towers vary from 60 to 125 meters in height. For more than 50 years, the Atlantic Relay Station has transmitted critical radio broadcasts to millions of listeners in some of the remotest parts of Africa.

The shortwave transmitters include two 250 kW Marconi BD272 transmitters originally installed in 1966 (and still in daily use) and four 250 kW RIZ K01 transmitters, which are also capable of transmitting in Digital Radio Mondiale mode.

Each transmitter can be switched to one of more than 20 antennas, which consist of HF curtain arrays beaming toward target areas in Africa and South America. Programming from London is delivered via satellite, with resilience and backup feeds.
Posted by T.L. Breyel at 8:49 PM