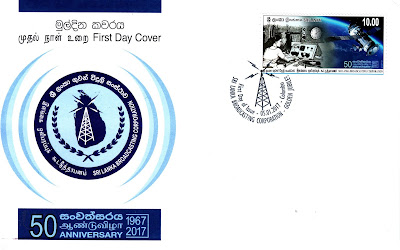 SRI LANKA POST on 5th January 2017 issued a  postal stamp to commemorate the Golden Jubilee of the Sri Lanka Broadcasting Corporation. It had a denomination of Rs.10.00. Stamp designer was Mr. Pulasthi Ediriweera.
The Sri Lanka Broadcasting Service commenced on 22nd July 1924 as a test transmission. It was launched officially on 16th December 1925. The test transmission was initiated by broadcasting a speech made by the then Governor Sir William Henry Manning, addressing the Lanka Electrical Engineers' annual meeting. The broadcasting service was officially inaugurated by broadcasting the speech made by the then Governor Sir Hugh Clifford addressing the general public from his office situated at Fort.
On 5th October 1945 the Ceylon Broadcasting service was instituted as a separate government Department while arrangements were made to construct a new building for the Service at the Torrington Square.
The station was known by many names from time to time such as "Wireless Broadcasting" and "Colombo Broadcasting". It functioned under the purview of the Postal Department until 30th September 1949.
From 5th October 1979 it was made independent and came to be known as Radio Ceylon.

On 5th January 1967 the Department of Broadcasting was converted to a government Corporation by way of Act No.37 of 1966.
The Corporation was inaugurated by the Hon. Prime Minister and came to be known as the Ceylon Broadcasting Corporation.

On 5th January 2017 the SLBC celebrates its Golden Jubilee by relocating its core functional Divisions in a new Administrative Building to be declared open by H.E. President Maithreepala Sirisena and the Hon. Prime Minister Ranil Wickramasinghe. A major Project aiming to renovate SLBC's studio complex was to have been completed by the same date.