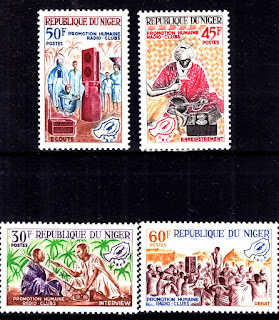 Although these four stamps were issued in 1965, they literally illustrate the vital role that radio communication still plays in society wherever one may be in the world, not just this developing nation in Africa.

In many parts of the world, radio is still a more accessible and affordable medium than the alternative, i.e. computers, internet, cellphones. Additionally, the infrastructure for these devices we take for granted in more developed countries just does not exist or is limited to those who have the money and/or social/political position.

This was highlighted to me a few years back when communicating with the station director at a radio station on the South Pacific island of New Ireland (Papua New Guinea). Only a few folks had a cellphone, internet was down most of the time, roads could be impassable due to flooding, tropical heat and humidity was corrosive to electric devices, but radio was available and cheaply replaced if necessary to almost everyone on the island.

More importantly, radio had the  reach to inform and entertain the people on this island. And mind you, it was radio with short-wave and medium-wave radio bands, not FM, as radio signals radiate further on these frequencies and over obstacles like hills/mountains, so much so that a listener like me, thousands of miles away, in Malaysia was able to receive their broadcasts.

That said, I often find postage stamps such as these historically interesting, and in some cases still relevant in promoting/disseminating a message to a nation's population. In 1965, these stamps  certainly would have been informative to the people in Niger. The social settings, the  clothing, etc would have been things they could relate to. And, these four stamps dedicated to "Promotion Humaine - Radio Clubs of Niger", i.e. recording music/songs, listening to radio transmissions, public debates and interviews intended for radio broadcasts, would have been topical in the day.

Anyway, that's how the old advertising/marketing guy in me looks at it and occasionally skews the world at large.
Posted by T.L. Breyel at 10:35 AM