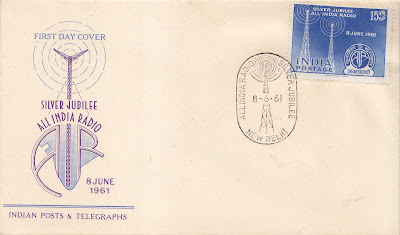 INDIA POST on 8th June 1961 issued a first day cover stamp commemorating the Silver Jubilee celebrations of All India Radio.
Broadcasting began in June 1923 during the British Raj with programs by the Bombay Presidency Radio Club and other radio clubs. According to an agreement on 23 July 1927, the private Indian Broadcasting Company Ltd (IBC) was authorised to operate two radio stations: the Bombay station which began on 23 July 1927, and the Calcutta station which followed on 26 August 1927. The company went into liquidation on 1 March 1930. The government took over the broadcasting facilities and began the Indian State Broadcasting Service (ISBS) on 1 April 1930 on an experimental basis for two years, and permanently in May 1932 it then went on to become All India Radio on 8 June 1936. 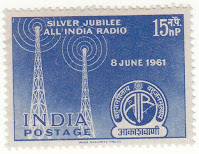 The emblem of AIR contains the Sanskrit word -- ākāśavānī -- "Message from the sky".
Posted by T.L. Breyel at 9:00 PM