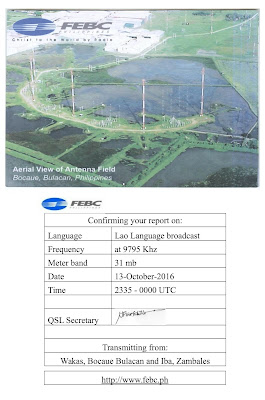 FEBC Manila, transmitting from Iba (Philippines), was logged on 13 October 2016. A Lao broadcast of presumed Evangelical topics and Lao songs were observed from 23.35 till 00.00 UTC (broadcast time 23.30 till 00.00 UTC). After the signature interval of FEBC, a Khmu broadcast followed at 00.00 UTC.

Interestingly, Khmu is the language of the Khmu people in northern Laos. It is spoken in adjacent areas of Vietnam, Thailand and China. Khmu lends its name to the Khmuic branch of the Austroasiatic language family, the latter of which also includes Khmer and Vietnamese. I mention this only because FEBC is dedicated to broadcasting in many Asian dialects which larger broadcasters do not. 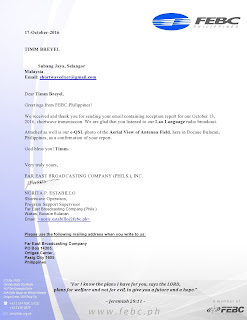 Reception report was emailed to FEBC Manila a few hours later, on the following day. An eQSL and letter arrived on 17 October 2015, after a follow-up email.