OCTOBER 3. This seems like an insignificant date to most people in the world. Yet, the date  commemorates Tag der Deutschen Einheit (Day of Unity in Germany).  It marks the anniversary of German reunification in 1990, when the goal of a united Germany -- which originated in the middle of the 19th century -- was fulfilled once again. This national holiday addresses neither the re-union nor the union, but rather the unity of Germany. 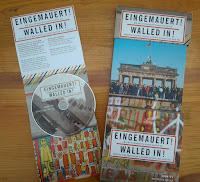 I thought why not look back on how this day has been marked over the years by a couple of international radio broadcasters, most notably Deutsche Welle and Global 24.

Back in 2010-2011, Deutsche Welle issued a QSL card and DVD entitled Eingemauert (Walled In). The DVD featured a documentary and timeline pamphlet on the Berlin Wall. Along with the DVD, a complementary QSL card was gifted to radio listeners. 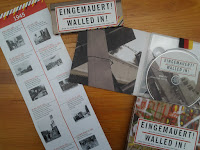 
In 2014, Global24 featured a special broadcast of music and commentary on the Berlin Wall.  A commemorative  QSL card for the broadcast was advertised to entice listeners to submit their reception reports in exchange for the card. To the best of my knowledge none or few, if any, cards were ever actually issued. In my case, Jeff White at WRMI subsequently verified with a WRMI card. 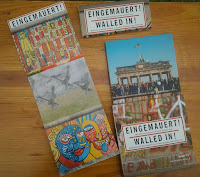 For the 25th anniversary of the fall of The Berlin Wall of Sound, the audio platform SoundCloud -- using its own features and tools -- created an audio visual memorial for the victims of the Berlin Wall. It comprised over seven minutes of original propaganda from former German Democratic Republic politicians, voices of border guard, embedded in sounds and frequencies, to allow one to not only remember the events, but feel them.