The Mighty KBC (via Nauen) 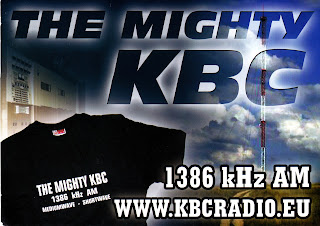 The Mighty KBC, transmitting from Nauen (Germany), was logged on 20 September 2015. Emperor Rosko's "LA Connection"  was observed playing a selection of classic rock/pop songs, including a selection of classic pop/rock music: Fly & The Family Stone - "Hail to the Music",  Michael Jackson - "Don't Stop Till You Get Enough", Van Morrison - "Domino (On the Radio)", "Dancing on a Saturday Night", The Emperors - "Dance the Rosko", "Baby, I Love You" and U2 - "The Miracle (Of Joey Ramone)". Station IDs, promos for KBC and advertisements were also noted from 12.30 till 13.00 UTC. At 13.00 UTC, the Ron O'Quinnn "Rock-n-Roll Rewind" show followed. 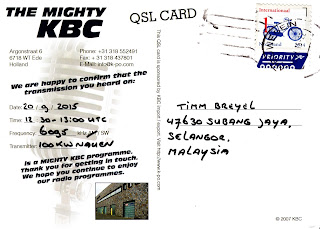 Reception on 6.095 kHz was (SINPO) 22531 -- weak to poor signal strength, but audible despite QRM splatter from adjacent station in Asia (CRI on 6.100 kHz?). Receiver used was a Sangean ATS-909. Signal has been detected in the past (January 2015, after 14.00 UTC) on this frequency, and again reception was not much better than this.

Reception report was emailed to the Mighty KBC on the same day. A report by mail with $$ for paper QSL followed a few days later. The  eQSL arrived on 21 September 2015. After an follow-up email to KBC regarding their paper QSL card, Eric van Willegen replied to say: "Good to hear from you. Yes,  I have received your letter. I have returned the paper QSl card +/- 1 week ago if I remember it correctly, so please wait a little bit longer. Please contact me if you haven't received it at the end of next week, than I will send a new one." QSL card arrived in the mail on 31 December 2015. 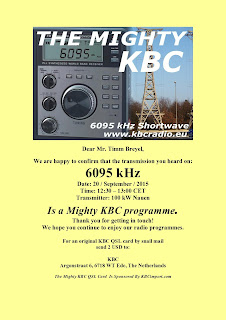