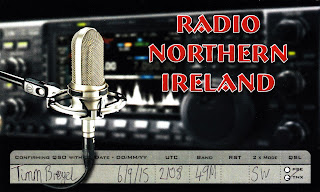 Radio Northern Ireland* via Channel 292, transmitting from Rohrbach (Germany), was logged on 6 September 2015. Broadcast was monitored from 21.08 till 21.28 UTC, with sign-on at 21.00 UTC. Contemporary / alternative music presented by a male DJ included "West Coast Queenie", station ID for "RNI" and DJ introducing the next track, a comedy skit (Lebanon Crisis) from a Northern Ireland TV series, followed by "I Like Driving in My Car" and  "Dance Floor"(?). At 21.28 UTC, severe QRM hampered further reception of RNI, either this or the transmission ended abruptly. Reception on 6.070 kHz was (SINPO) 55555 -- excellent on all accounts until 21.28 UTC when severe QRM from an identifiable source overwhelmed signal drowning out audio. 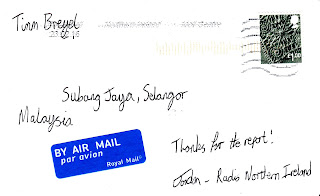 Reception report was emailed to Radio Northern Ireland on the same day. Jordan at RNI replied the following day promising a QSL. He also mentioned the QRM was from a Brazilian station and that he would reschedule for a better time slot to avoid future interference. QSL card arrived in the mail on 4 March 2016. Thank you, Jordan!

*Transmission was received via SDR receiver at Twente University in the Netherlands
Posted by T.L. Breyel at 3:30 PM