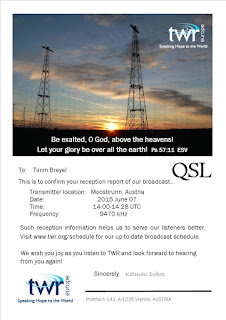 Trans World Radio Europe, transmitting from Moosbrunn (Austria), was logged on 7 June 2015. A Russian language programme of mostly talk and some music was heard from 14.00 to 14.28 UTC. Reception on 9.470 kHz (SINPO) 15431 -- poor to weak signal, atmospheric noise, audible speech present when signal did not fade out. Reception began to improve gradually after 14.15 UTC, but still weak. Interestingly, TWR Europe via Nauen operates on 7.300 kHz at the same time too, but no signal was detected in Malaysia.

Reception report was email and submitted online on 7 June 2015. TWR Europe was previously QSLed  from Wertachtal and Moosbrunn in 2011. An eQSL for the above tranission was received on 30 July 2015.