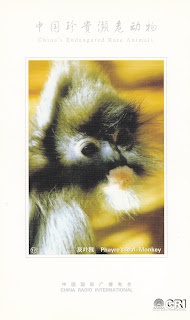 China Radio International, transmitting from Bamako, Mali, was logged on 2 June 2015. A Hausa language broadcast was heard from 18.00 till 18.30 UTC, followed by Arabic at 18.30 UTC. Reception on 11.640 kHz was (SINPO): 44544 -- excellent signal and clear audio, despite transmitter hum and slight, fluttering fade. CRI has apparently rectified the transmitter issues at the Bamako site, which previously radiated a strong carrier with poor audio. 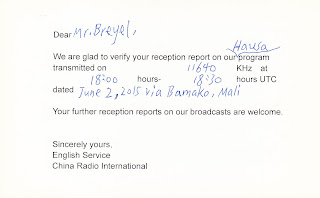 Reception report was emailed to CRI on 3 June 2015. Later in the afternoon I received an email from CRI, saying: "Thank you for your reception report. We will send you a QSL card." QSL card and paper cuttings from CRI arrived on 18 June 2015.
Posted by T.L. Breyel at 9:38 PM