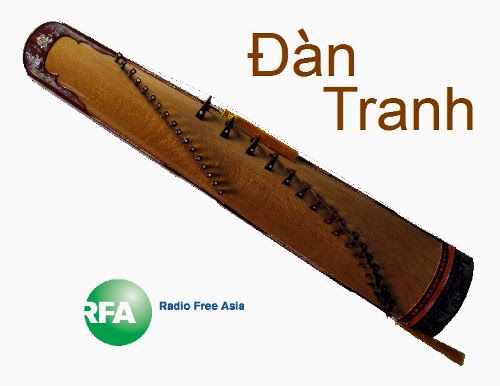 Radio Free Asia's 53rd QSL card release is the third design in the series "Celebrating Musical Instruments of Asia". This card shows a dan tranh which is a traditional, Vietnamese stringed instrument. Dan tranhs are long and narrow having a rounded, or convex, surface. Each string is supported by a wooden, or bone, bridge in an inverted "V" position. Dan tranhs are covered with high-gloss lacquer and, in many cases, ornately designed with mother-of-pearl which was used for RFA's QSL. The history of the dan tranh dates back hundreds of years and it is still a popular instrument in Vietnam today. This QSL is used to confirm all valid reception reports received from April 1 to June 30, 2014.

To obtain this QSL card I submitted a reception report of RFA's broadcast in Lao. Chinese and Tibetan language broadcasts are effectively squelched in South East Asia, regardless of transmitter location. On some occasions they do manage to squeak through, but just barely. Hence, the odds of receiving an RFA broadcast in any of seven other Asian languages improved the probabily of reception.

In this case I tuned in to Radio Free Asia, transmitting from the IBB relay site in Saipan/Agingan Point, on 13 May 2014. A Lao language broadcast of news and current events related to Laotians in Thailand, Vietnam and Laos was reported from 11.00 to 12.00 UTC. Reception on 9.325 kHz was (SINPO): 55555 -- excellent!!!

This RFA broadcast at sign-on may be heard HERE.

Reception report was emailed shortly after transmission on 13 May 2014. QSL card arrive in the mail on 22 May 2014.