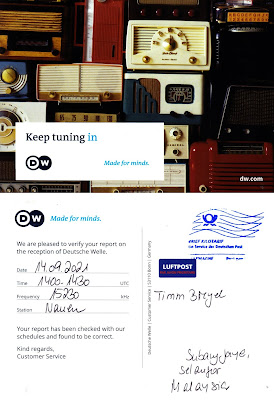 Deutsche Welle, transmitting from Nauen to Afghanistan, was received on 14 September 2021 from 14.00 till 14.30 UTC. A Dari language broadcast of current event reports about the Taliban was noted between filler music. Pashto language broadcast followed at 14.30 till 15.00 UTC Reception on 15.230 kHz rated a SINPO of 55544 -- strong and clear signal despite slight atmospheric noise when signal strength dropped. Reception on 15.230 kHz was certainly much better than 15.390 kHz which was weaker with what sounded like a carrier issue. HERE is DW via Nauen.
Reception report was emailed to Deutsche Welle on the following day. Shortly afterwards a DW representative replied saying DW had discontinued issuing QSL cards as of 1 September 2021. Then, out of the blue, a QSL card arrives in the letterbox on 25 November 2021. Never say never!
RX: Alinco DX-R8T EXT ANT: 1/4 wave QTH: Malaysia
Posted by T.L. Breyel at 12:13 AM