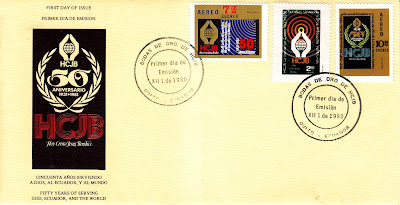 AEREO ECUADOR in 1981 issued three first day cover stams marking the 50th anniversary of Radio Station HCJB.
Save perhaps for Vatican Radio, which was founded in February 1931, the earliest major religious shortwave station was HCJB, in Quito, Ecuador. The creation of American evangelists Clarence W. Jones and Reuben E. Larson, it too began broadcasting in 1931, on Christmas Day. Starting out with a 200 watt transmitter, it increased power over the years, reaching 500 kW in 1982. Over the years HCJB developed a major shortwave presence.  It had  strong technical and production capabilities, and its extensive English and foreign-language schedule served listeners throughout the world. 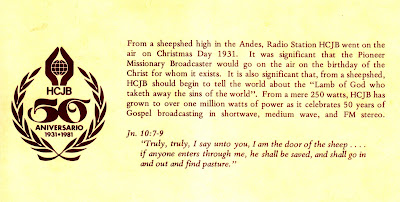 For decades it was one of the first stations a new SWL -- including yours truly -- would hear, and it was very friendly toward the SWL community.  It's DX programme, "DX Partyline," was on the air for over 40 years, and the related HCJB-sponsored ANDEX club was similarly long-lived (1974-96).
Starting in 1997, budget constraints, plus the need to remove its antennas due to nearby airport construction, brought about a rethinking of the entire HCJB ministry, and the next decade saw major cutbacks.  Although today the station operates on but a single 10 kw. channel, and only in Spanish and a few other Latin American languages, it boasts a legacy as one of the world's true shortwave pioneers.
Posted by T.L. Breyel at 5:18 AM