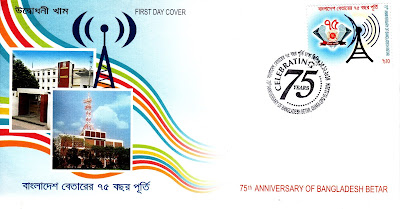 BANGLADESH POST on 15th December 2014 issued a single first day cover stamp marking the 75th anniversary of Bangladesh Betar.
Bangladesh Betar or BB is the state-owned radio broadcaster of Bangladesh established after Bangladesh's independence from Pakistan in 1971. It was also known as Radio Bangladesh between 1975 and 1996.

Radio transmission in the region now forming Bangladesh started in Dhaka on 16 December  1939 as part of All India Radio. Initially, the station was located in Nazimuddin Road, old Dhaka. Its maximum transmission range was 45 kilometre. In 1954, broadcasting started in Rajshahi. On 8 September 1960, the radio station was moved to a modern office in Shahbag with six professional studios and renamed to Radio Pakistan. More regional stations were opened in Sylhet in 1961, Savar in 1963, Rangpur in 1967 and in Khulna in 1970.

The station played an important role during the Bangladesh Liberation War of 1971. On 26 March 1971, the broadcasting centre of Radio Pakistan was used to transmit a declaration of independence, which was picked up by a Japanese ship in Chittagong Harbor and retransmitted. During the war, the Pakistan Army took over the Radio Station in Dhaka and the Bangladeshi operated Swadhin Bangla Betar Kendra (Independent Bengal Radio Station) clandestinely. Because of heavy shelling, the station had to be relocated several times, and ultimately moved to Calcutta on May 25, from where it would broadcast until the end of the war. On December 6, it was renamed Bangladesh Betar. Its current headquarters were completed in 1983 at National Broadcasting House, Agargaon