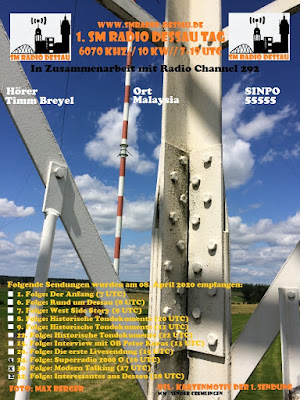 SM Radio Dessau*, transmitting from Channel 292 in Rohrbach, Germany, was logged on  8 April 2020. Transmission on 6.070 kHz was initially monitored at 16.00 UTC, using the SDR receiver at Twente University in the Netherlands. Unfortunately, reception rated a paltry SINPO of  15111. After listening for more than 30 minutes and scanning other frequencies I discovered Twente had a technical fault; that is, the antenna was down and could not be repaired during Covid-19 crisis). I reached this conclusion at 17.55 UTC when I used an SDR receiver located in Stafford, Central England. At that point, from 17.55 till 18.30 UTC, SINPO was 55555 -- excellent reception after 18.05 UTC.

Reception report was emailed to Max Berger at SM Radio Dessau on the same day. An eQSL arrived on 9 April 2020.