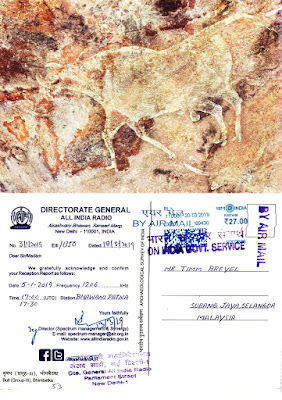 All India Radio Bhawanipatna in  Odisha (India) was logged on 5 January 2019. Indian classical/devotional music with ID at the half hour was observed from 17.00 till 17.30 UTC. SINPO on 1206 kHz (MW) rated 34433 -- fair signal, occasionally clear and audible content when not fading every few minutes. HERE is AIR Bhawanipatna.

This medium-wave station was received  at night  while on holiday in the Cameron Highlands. Signal was detected as I sat on the hotel balcony of the Hetitage Hotel. Had heard the station in Kuala Lumpur area previously, but signal was much weaker compared to the transmission received in Tanah Rata, Pahang.