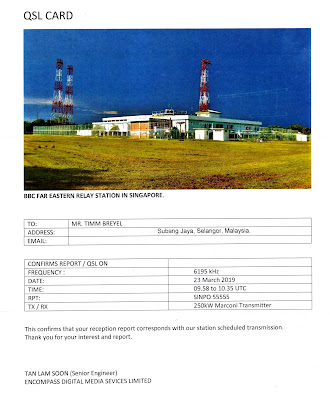 BBC - Far Eastern Relay Station (Encompass) via Kranji was received on 23 March 2019. "Sports Hour" with Shari Val and BBC News Hour" presented by David Harper was monitored from 09.58 till 10.35 UTC. Reception on the short-wave frequency of 6.195 kHz rated a SINPO of 55555 -- excellent on all accounts! HERE is BBC (Kranji).

While BBC Far Eastern Relay Station (Kranji) is an easy catch in neighbouring Malaysia, their QSL has eluded me for the past 10 years, largely because the BBC rarely if ever verifies anymore. For years and years, I sent reception report after reception report, all to no avail, save for this one.That's what makes this QSL letter all the more valuable.

Reception report was posted a few days after this broadcast. QSL letter arrived in the mail on 30 April 2019. 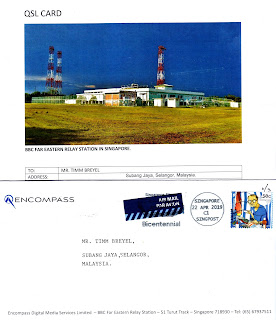