Voice of America (via Meyerton) 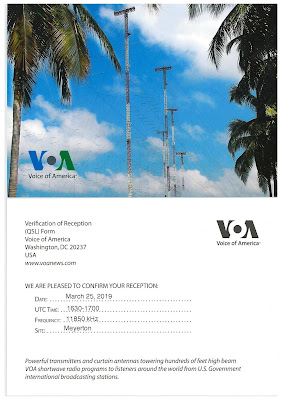 Reception report was emailed on the following day. This eQSL was received on 26 March 2019. Hopefully a similar paper QSL card will arrive in the mail later.

As most DXers know the SENTEC Meyerton facility will cease operation on 31 March 2019. A few days remain should one wish to catch this once great transmitter site. The VOA QSL in itself is quite unique. 73.