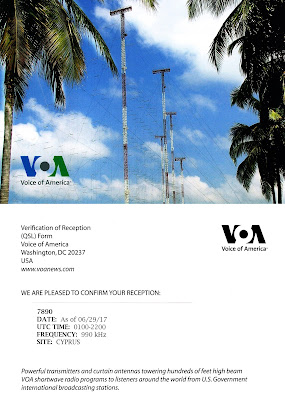 Radio Sawa / BBG via Cap Greco, Cyprus was received  on the medium-wave frequency of 990 kHz, rating a SINPO of 24432 -- weak to fair signal strength, occasionally clear and discernible content whenever signal peaked (every two to three minutes). An Arabic language broadcast featuring news reports / discussion was heard on 13 October 2017, from 17.25 till 17.45 UTC.

This was a pretty impressive radio catch considering the distance between Cape Greco to Kuala Lumpur is approximately 7,773 km. But then, the transmitter is reportedly rated at 600 to 800 kW. The actual intended target area was the Middle East. 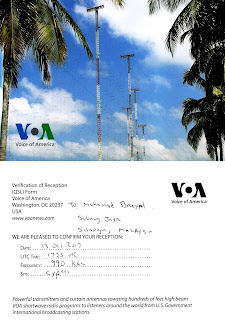 Reception report with audio files was emailed to several contacts at Radio Sawa and BBG shortly afterwards. A follow up report was emailed on 10 January 2018; an email reply from Gerhard Straub promised to forward report for QSL card on the same day. This is the promised QSL card from BBG/VOA-Radio Sawa which was received on 21 March 2018. A follow-up QSL with handwritten verification was received on 24 May 2018.