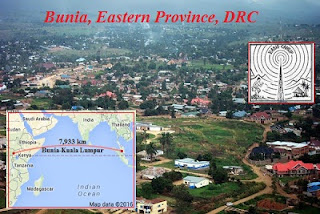 Radio Télé Candip, transmitting at 1 kW or less from Bunia, in the Eastern Province of the Democratic Republic of Congo, was logged on 26 February 2016. A French language programme with female DJ in a long news commentary was noted at 19.00 UTC, followed by a few African (Congolese?) songs and a deep baritone voiced DJ chatting, off and on, after 19.25 UTC. Transmission ended at 19.57 UTC.

Reception on 5.066 kHz throughout the transmission was poor but audible, rating a (SINPO) of 24321. Signal was weak and degraded further due to severe atmospheric noise and occasional fading. Despite these terrible conditions, speech and music was detected.

Interestingly, Radio Télé Candip's broadcast times are about as erratic as is their reception beyond the DRC, according to comments garnered in the radio chat rooms around the Internet. For my part, propagation and luck was integral in my ability to receive the station. After many years and many failed attempts to receive the station, I  managed at last to hear their signal. 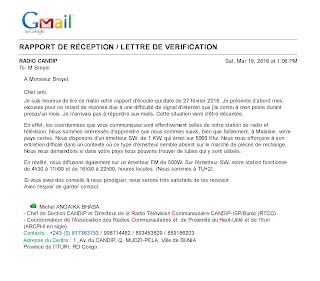 In the letter, there is also mention of much needed tubes and parts for their transmitter.