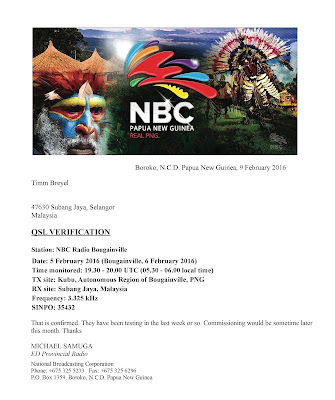 National Broadcasting Corporation - Radio Bougainville, transmitting from Kubu, in the autonomous region of Bougainville (Papua New Guinea), was logged on  5 February 2016 (locally 6 February 2016). A selection of vocal reggae and steelpan music was heard between DJ chatter from 05.30am till 06.00am Bougainville time (19.30 till 20,00 UTC), Sign-on reportedly is at 19.00 UTC.

Reception quality on 3.325 kHz was initially (SINPO) 35432 -- fair signal strength with intermittent fading every two to three seconds apart, yet clear and audible content was observed. By 05.50am (19.50 UTC) signal weakened to (SINPO) 25421; while speech was audible. at times content could not be clearly understood. From 06.00am (20.00 UTC) onward, signal was present but too weak to receive well.

The following day, Radio Bougainville was not heard. This leads me to believe the sporadic broadcast schedule has more to do with the testing of a new 10kW transmitter than anything else. They also are reportedly testing on 6.020 kHz as well as 3.325 kHz. In South East Asia, 6.020 kHz is either occupied by  stations in China (CRI) or Vietnam (VoV 4 in DacLac), making reception virtually impossible; 3.325 kHz is ideal, provided it is before RRI Palangkaraya in Kalimantan signs on at 21.55 UTC. For more news about the reactivation of NBC Radio Bougainville, see this LINK. 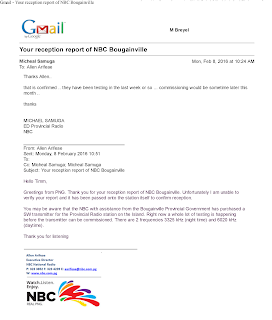 By the way, NBC affiliate stations and frequencies are listed at their updated website, some with either new frequencies or pending revision -- it's hard to say.

Reception report was emailed and submitted online at the NBC website on 6 February 2016. A prompt reply from their online messaging service was received, stating my reception report and audio file would be forwarded to the Executive Director of Radio, Allen Arifeae. He in turn replied saying he would look into the matter once he returned to his office.

On 8 February 2016, Michael Samuga, ED Provincial Radio for NBC confirmed for Allen Arifeae that this was indeed a "test transmission" of NBC Radio Bougainville. He also mentioned the transmitter/station would be commissioned near the end of the month (February 2016). I followed up by requesting and drafting an 'official' Letter of Verification.