Radio Öömrang from Amrum Island in the German North Frisian Islands will broadcast their annual programme on Sunday, 21 February 2016. Transmission commences at 16.00 UTC until 17.00 UTC. Frequency will be 15.215 kHz via Issoudun (France) with a programme in the Frisian dialect, German and English. For verification card, contact qsl-shortwave@media-broadcast.com 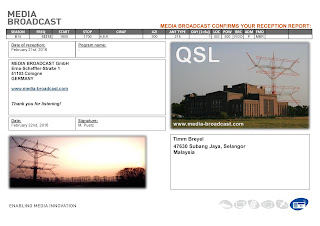 Radio Öömrang via Broadcast Media GmbH was heard under extremely poor conditions on 21 February 2016, here in the Kuala Lumpur area. This largely talk oriented broadcast was moderated by a male announcer who interviewed listeners/residents of Amrum Island. Conversations alternated between English, Frisian and German.

Reception between 16.00 till 16.30 UTC (broadcast time 16.00 till 17.00 UTC) on 15.215 kHz was (SINPO) 15421. At sign-on only a very faint and fading carrier signal was present. Approximately 10 minutes into the broadcast speech was clearly, but weakly detected in LSB mode. Reception remained poor and at times completely inaudible.