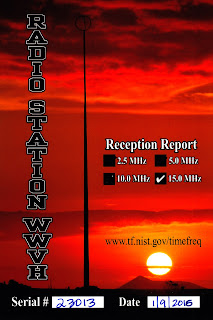 WWVH in Kauai, Hawaii was logged on 9 January 2016, operating on the short-wave frequency of 15 Mhz. This was quite a feat as BPM - National Time Service Center in Shangqui Lintong, People's Republic of China broadcasts on the same frequency and pretty much dominates it. Reception on 15 MHz was (SINPO) 12551 -- audible speech of  female announcer presenting time on the minute in  English along with times pips were heard mixing under BPM's stronger time pips, from 07.45 till 08.00 UTC.