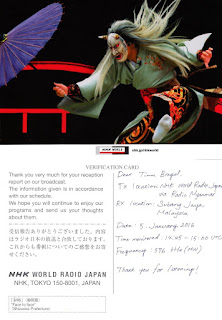 NHK World Radio Japan, using the facilities of  Radio Myanmar in Yangoon, was heard on 5 January 2016.  A Burmese language broadcast, featuring a radio drama and selection of Burmese music with frequent IDs for NHK World, was heard from 14.45 till 15.00 UTC. Reception on the medium-wave frequency of 576 kHz was (SINPO) 45454 -- good to excellent signal strength, clear and discernible speech, with only minor local QRN.

Reception report was submitted on-line to NHK World Radio Japan on 6 January 2015. QSL card was received on 2 February 2016. I followed up with an email to Myanmar Radio in March 2016. They replied with an eQSL on 26 April 2016. 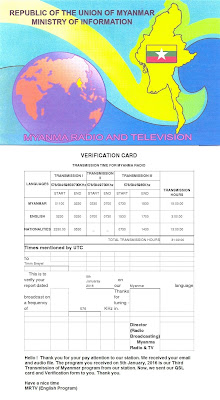